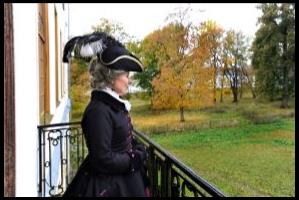 The original Manor farm dates from the mid 17th century.

However, in 1730 Ljung was bought by Count Hans von Fersen although it was his son Axel who really extended and developed the property.

Count Axel von Fersen the Elder was both Field Marshal, Councillor of the State as well as Leader of the “Hat” Party. He chose a completely new site for the main buildings and commissioned the architect Jean Eric Rehn to design them. Rehn also planned the interior, including the tiled stoves that were very modern at that time.

Count von Fersen did not enjoy his new home at Ljung for very long. He died in 1794 and his son, Count Axel von Fersen the Younger, inherited the estate.

The Manor which is privately owned,  is no longer occupied and has been empty since 1939.

However, it is possible to visit the Manor during the summer months

by getting in touch with